There has been some buzz about HTML5 web video lately. I won’t retell the story here, because it’s almost completely political and not technical, while I’m only interested in the technical side of things. One thing that struck me, though, is that many people believe that the two contenders, H.264 and Ogg Theora, are comparative in quality and performance. As someone who implements video codecs for a living, this struck me as quite odd: How can a refined version of an old and crippled MPEG-4 derivate come anywhere close to a format that incorporates (almost) all of the the latest and greatest of video compression research? I decided to give it a try and compare H.264, Theora and a few other codecs myself.

This isn’t one of the Doom9 codec shootouts, so I wasn’t going to compare each and every implementation of H.264, MPEG-4 and other codecs of the world. I’m mainly interested in how the different compression formats compare to each other. That’s why I picked just one representative candidate for each format:

Unfortunately, Windows Media Video 9 and its brother VC-1 are missing here – I’d really love to include them, but I conducted all of the tests on Linux and to my knowledge, there’s no VC-1 encoder for Linux yet.

Now I’m going to explain how exactly my tests were conducted. If this is not interesting to you, you can skip this section altogether – but don’t complain about anything if you didn’t read it! ;)

I used only one test sequence: A movie trailer for the recent »Star Trek« movie, downloaded from Apple’s movie trailer page in full HD resolution and downscaled to 800×336 pixels using a high-quality Lanczos scaler. This is one of the test cases used by Theora 1.1 main developer Monty during his optimization work. Certainly, a single sequence is not fully representative for a codec’s performance, but movie trailers are usually a good compromise because they contain a mix of high-action and static scenes.

The sequence was encoded with a target bitrates of 250, 350, 500, 700, 1000, 1400 and 2000 kilobits per second (kbps). This is a logarithmic scale: There’s a factor of roughly the square root of 2 between each step. The lower end bitrate was chosen to be an extremely low-rate test – too low for FFmpeg’s MPEG-2 encoder, which simply refused to encode the stream at this bitrate. The upper-end 2 Mbps rate is at a point where quality is expected to be nearly transparent with a modern codec.

Note that all tests were run using two-pass encoding, with the exception of Dirac, which doesn’t offer this option (yet?).

I’m also interested in the algorithmic complexity of the various encoders, so I measured the times required for encoding, too. Measurement was done using the wall-clock time as output from /usr/bin/time. The times for both encoding passes were then added and the time required to decode the input sequence (which was losslessly compressed) was subtracted. All tests were repeated three times and the minimum times were used. All multithreading options were turned off; in fact, I even ran the tests with a fixed single-CPU affinity mask. This was done to ensure that the CPU times represent a measure of encoder complexity without discriminating encoders that don’t have proper multi-core support.

As an additional measurement of codec complexity, the time required for decoding the clips was measured, too. Decoding was done using FFmpeg for MPEG-4, MPEG-2 and H.264; Theora was decoded by its reference decoder and Dirac was decoded with libschroedinger. In all cases except H.264, this means that a pretty fast decoder is used and the results are close to what is possible for the respective format. For H.264, the values are roughly 20% worse than what a good decoder like DivX 7 can achieve.

Objective quality measurements were conducted using the SSIM index, an image quality metric that models the human perception much better than simple metrics like PSNR or MSE do. The implementation was taken from AviSynth‘s SSIM filter with lumi masking enabled.

Almost all encoders decently fulfilled the task of keeping the configured bitrate. x264 is particularly exact: The largest deviation I measured was just over a tenth of a percent. FFmpeg’s MPEG-2 encoder is also pretty exact, it hit all target bitrates withing one percent. Theora is not much worse, it’s results were within two percent.

Now here’s the most important set of results from the test: The SSIM-over-bitrate graph. 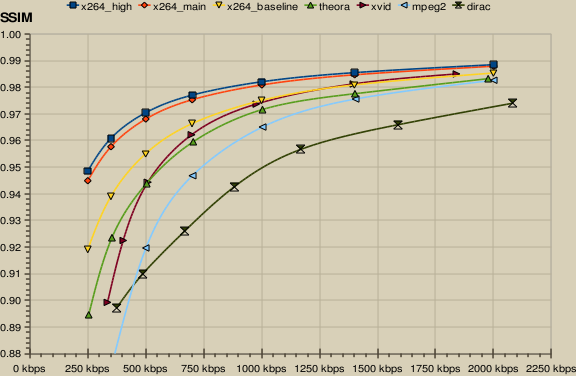 This graph holds some surprises indeed. Let’s analyze it bit for bit:

Unfortunately, the abstract SSIM values are only good for comparing results against each other, but it’s impossible to say how e.g. a SSIM difference of 0.01 is going to look like. The only way to get real quantitative measurements like »encoder A is 10% better than encoder B« is to see which bitrate is required to achieve a specific SSIM value. To do this, I interpolated the SSIM results using bicubic spline interpolation (like what you see in the graph) and used the Newton-Raphson method to determine the theoretical bitrate at a few SSIM values:

The percentage values show the bitrate relative to the best result, which is x264 High Profile in all cases. These results show some very clear figures: For example, x264 Main Profile consistently requires 10% more bitrate than High Profile to achieve the same quality, Baseline Profile requires around 60% more bits. XviD converges against x264 with higher qualities, starting at double the bitrate at the (quite bad-looking) 0.95 SSIM index and reaching a respectable 153% bitrate factor at the good 0.99 SSIM index. MPEG-2 is similar, but it starts at factor 3 and goes down to factor 2 with rising quality. The same is true for Dirac, which starts almost at factor 4 and ends at factor 3. Theora converges much slower and keeps around factor 2 when compared to x264 High Profile.

While SSIM is a highly useful metric for objective measurement, nothing can replace real visual inspection. For the following image comparison, I selected two frames from the trailer, one of them from a high-motion scene and one from a low-motion scene. (By the way, that’s exactly the frame Monty used in one of his status reports :) 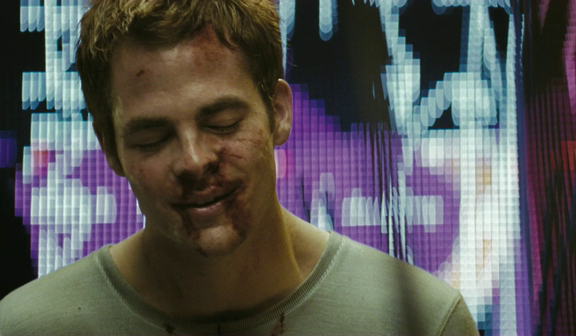 In my opinion, the subjective results confirm the objective measurements pretty accurately.

Now let’s see how much time it takes to encode video for the different formats: 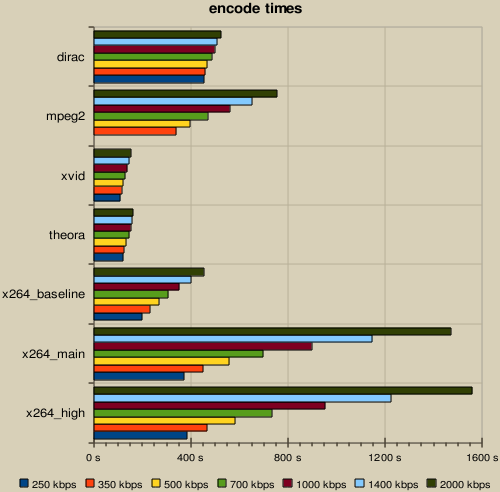 This graph shows clearly that XviD and Theora are very close together and they are by far the fastest encoders around, regardless of the bitrate. x264’s speed is generally very dependent on the bitrate: In Baseline Profile, the highest bitrate takes twice the time of the lowest bitrate, for the other profiles, the factor grows to 4. Baseline Profile is also comparably fast to encode: x264 takes around twice the time in this mode when compared to XviD and Theora. However, Main and High Profile take very, very long to encode – CABAC, B-Frames and Weighted Prediction are powerful, but computationally expensive tools. Just like the SSIM values, the encoding times of these two profiles are very close together, so there’s no real reason to use Main Profile in my opinion.

FFmpeg’s MPEG-2 encoder is surprisingly slow, but given FFmpeg’s reputation, I doubt that’s because of missing optimizations – I rather think that’s due to libavcodec trying to squeeze the most out of the outdated format. Finally, there’s Dirac, which is as fast as MPEG-2 at medium bitrates, except that it’s almost the same speed over the full bitrate range. 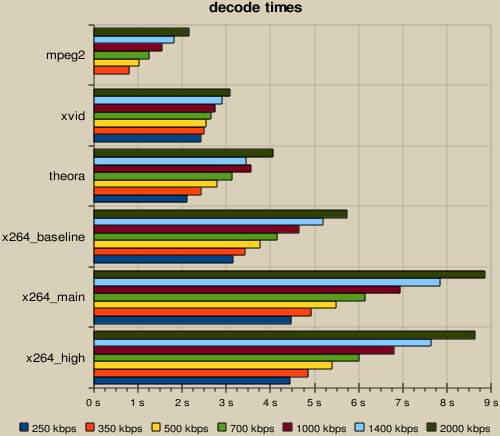 The decoding times are much less surprising: The old MPEG-2 codec is the clear winner here, followed by the also out-fashioned MPEG-4 ASP a.k.a. XviD. Theora is a tiny bit faster than this at low bitrates, but equally slower at higher bitrates. H.264 Baseline is consistently about 50% slower than Theora across the whole bitrate range, and H.264 Main and High Profiles are again 50% slower. Again, the latter two profiles are very close to each other, but this time with a little surprise: Main Profile is actually a tiny bit slower to decode than High Profile. This might be related to heavy optimization for 8×8 transform decoding in FFmpeg, but that’s just a wild guess. Mind you, other H.264 decoder may behave differently, but expect around 20% more speed from either CoreAVC or MainConcept (e.g. DivX 7), making the difference between Theora and H.264 High Profile considerably less than factor 2.

Dirac isn’t included in the graph for a good reason: Even the optimized Schroedinger decoder is more than 3 times slower than H.264 Main/High Profile …

My conclusion in one sentence: x264 is the best free video encoder. The H.264 format proves that it’s the most powerful video compression scheme in existence. The main competition in the web video field, Ogg Theora, is a big disappointment: I never expected it to play in the same league as x264, but even I didn’t think that it would be worse than even Baseline Profile and that it’s in the same league as the venerable old XviD which doesn’t even have in-loop deblocking. (But then again, XviD does have B-Frames, which might have made the difference here.)
The other codec that’s often cited by the »web video must be free« camp, Dirac, is an even larger disappointment: It’s not only by far the worst codec in the field, even in comparison to the more than 15 year old MPEG-2, it’s also painfully slow to decode. So I can just reiterate: If quality matters, then H.264 is the way to go, there’s absolutely no doubt about that.