It started quite innocently with a few Twitter threads about retro DOS gaming. The question was why no games (or any other software, for that matter) that were designed for EGA graphics cards made use of the additional colors EGA could offer. It’s widely known that EGA cards had a reprogrammable palette and could show any 16 out of 64 available colors on screen; but still, all software of the time just used the 16 default colors that were already possible with CGA graphics. Some explanations to this phenomenon were discussed, but it was mostly centered around what was possible and not why. Falling prey to nerd sniping, I dug deeper and deeper into the topic, including writing test programs in BASIC and Pascal, and now I finally understand everything about color generation in CGA, EGA and VGA cards.

END_OF_DOCUMENT_TOKEN_TO_BE_REPLACED

Following up on my quest to produce small executables, I turned my findings (along with much more information about general techniques used in size-constrained demosccene productions) into a presentation, held at Deadline 2017: 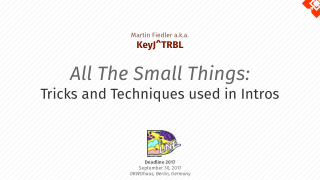 Posted in Other | No Comments yet

There’s a wide variety of devices out there which are capable of video playback – computers, music players, mobile phones, game consoles, you name it. However, all of them support a different set of formats and there’s no combination to catch them all. So if you want to generate a video, you will always have to pick a format based on a selection of devices that are important to you. To make this a little bit easier, I prepared a little tool for you:

END_OF_DOCUMENT_TOKEN_TO_BE_REPLACED

I’m a happy user of the Fujifilm S9500 bridge camera since 2005, but lately, I noticed that it would also be really nice to have a second, smaller camera that I can take with me (almost) everywhere. This isn’t a problem in itself – there are countless compact point-and-shoot cameras at around 200 € on the market. However, most (if not all) of these suffer from too high resolutions and too small (1/2.5″) sensors. The days of the legendary F30/F31 with its large 6-megapixel sensor and unrivalled low noise are also long gone, so my »new camera« project was on hold for a long time. That was until february, when Fujifilm announced the release of its new compact F-series model, the F200EXR, based on the highly anticipated SuperCCD EXR sensor. After reading the first beta reviews and seeing the first example images, I immediately ordered the camera and it arrived just in time for my Paris visit, where I had the perfect opportunity to test the camera. Here’s what I found out.
END_OF_DOCUMENT_TOKEN_TO_BE_REPLACED

Over the last few years, I bought one specimen of all four generations of Apple’s iPod nano media player, mainly to make rePear compatible with each new model. (In fact, rePear’s main development target are iPod nanos.) Here are my thoughts about the benefits and drawbacks of each generation.
END_OF_DOCUMENT_TOKEN_TO_BE_REPLACED

Posted in iPod, Other, Reviews | No Comments yet

For a very long time, this blog was run by WordPress 2.0.x – this was the current version when I started it, and I kept updating it for a while, but after I built the captcha, I stopped doing so. The reason is that I implemented my captcha as a direct hack in WordPress’ sources, not as a plugin, not even a my-hacks.php file. In the meantime, I some security holes appeared: I frequently found invisible spam injected into my posts. I have never found the actual hole through which they did this, but I disabled everything that could be problematic (all this Web2.0ey XMLRPC crap, for example). In particular, I excluded all hosts from a certain spam-friendly provider from my site. This helped a lot, until last week, when I suddenly found that my Windows 7 review has not only been altered, but replaced by invisible spam.

This was the point when I finally had enough – I upgraded the blog to WordPress 2.7 yesterday. To my great surprise, the test transition, performed on a local copy of the site, worked absolutely flawlessly. I could even re-use my theme without changes, which was my greatest source of fear. On the real server, there was still the little problem of the PHP memory limit which was too low for WP 2.7 (why on earth do they use more than 8 MiB, even without plugins and locales?!), but this has been fixed with a simple mail to my friendly webspace provider (thanks, Rafayel!).

Everything worked, except the captcha, which I reimplemented as a proper WordPress plugin today and activated just now. By the way, in the 22 hours without the captcha, I already got over a dozen spam posts. Sigh. Let’s see how long this installment of the site works :)

Posted in Other, Personal | No Comments yet

Sorry, but this post has been vandalized by spammers that somehow altered the post text. If anyone has a saved backup of this post, please give it to me.

Posted in Other | No Comments yet

I want to apologize for the lack of posts here. I know that many people want to know the outcome of the Apple thing and the status of the two jeopardized programs. So, to finally break the much too long period of silence, here’s the current status of the projects:

The presentation program is online again under its new name Impressive: http://impressive.sourceforge.net. Currently, there’s only a rebranded 0.10.2 version, but I hope to move forward with a new version in the first quarter of 2009.

The iPod management tool has been renamed to rePear: http://repear.sourceforge.net/. Along with the rename, the brand-new and much improved version 0.4 has been released.

I find it unfortunate and unnecessary that the issue needed to be settled involving layers and lots of money. It would have been easier for both sides (and certainly more civilized) to simply write an e-mail to state the problem. I am willing to co-operate. You can still call your lawyers if I don’t comply, but I don’t see any reason why there should be money involved from the start.

END_OF_DOCUMENT_TOKEN_TO_BE_REPLACED

What’s the deal with all the »censored« words?

The short answer: Because Apple didn’t like the names of some of my programs.

In the meantime, I also started another project: I bought an Apple iPod nano music player and since I’m not satisfied with iTunes, I wrote a program that made it possible to use that nice MP3 player without that not-so-nice-software. I gave it a name that was derived from a normal english word, except that there was one upper-case letter where a lower-case letter should have been. That might have been too much for Apple’s legal department, though, because they threatened to sue me because of this, too. That’s why this program also needs to be renamed.

In late 2008, the programs have been renamed to Impressive and rePear.

It could have been a nice evening today, but to my great surprise, I found a not-so-nice e-mail in my Inbox – and at the same time, my parents found the same thing as snail mail in their mailbox at home.

To cut a long story short: Apple Inc. sent me (via a German lawyer) a »cease and desist« letter. They believe that the names CENSORED and CENSORED-s (sic!) violate their trademarks »Keynote« and »iTunes«.
Frankly, I do have a little bit of understanding in the first case. In fact, I saw it coming. I couldn’t expect that the uppercase letter »J« I put in the middle of the name, radically changing both the look and the pronounciation, was enough to stop Apple from sueing me, or could I?
The other case is a little bit more awkward because there simply is no such thing as CENSORED-s. I have written a program with a name that looks like the one they’re accusing me to use, but there is no ‘s’ at the end of the name! In the first two pages of the lengthy mail the lawyers sent me, they even did spell it correctly. But then, in all places that really matter, like the cease and desist form itself (»Unterlassungserklärung«) and the explanation why they think I’m violating their trademark, they constantly write the name with the additional ‘s’. So, in fact, even if I would sign that letter, I would commit myself not to use a product name I never used! (That flaw aside, I also don’t think that there’s a sufficient amount of similarity between »iTunes« and CENSORED.)

To make things worse, they chose an insane amount in controversy (»Gegenstandswert«) of 50,000 € each in both cases. That seems to be quite a lot, considering that both programs in questions are FOSS, meaning that I did neither pay nor earn anything for making them. Out of these 100,000 € in total, they compute a fee (»Geschäftsgebühr«) of nearly 1,800 € I’d have to pay if I sign the form.
Also, they set up a ridiculously short time frame to sign it: If I don’t send it back and pay the fee until 2008-06-26 (this Thursday), they’ll likely be sueing me. Mind you, I got the letter this evening (2008-06-22), because they sent it late Friday (2008-06-20, the e-mail is dated 16:09) and I was neither at home nor did I have internet access this weekend. That’s 6 days of time, but since it’s around a weekend, it’s effectively only 3.

The great question is now, what could I do? I can’t just sign the letter and pay the bill, because it’s factually wrong. On the other hand, if I take myself a lawyer, it might be too late to change anything in the matter and would maybe double the fee (assuming that my own lawyer would also use the ridiculous 100,000 € value as a baseline for his/her payment). Seems as if I’m screwed either way.

The only thing that’s clear is that both my presentation program and one of my iPod tools will be renamed soon. If you have a nice new non-Appleish name for these projects, please let me know :)
END_OF_DOCUMENT_TOKEN_TO_BE_REPLACED