This post and the software described in it were originally planned to be released before or on December 24th, but I didn’t manage to finish either. So consider my random wallpaper generator as a late christmas gift.

The idea for this program was born rather quickly: I wanted to have some nice and fancy desktop background images (»wallpapers«), and I wanted them to change every day. This is nothing new, I already did that in the past by writing scripts that choose one random image from a certain directory, scale them to fit on the screen and use them as wallpaper. This approach is simple and common; it’s supported by all major desktop enviroments now, if I remember correctly. However, it has two drawbacks: First, you need to update the pool of available images every now and then so it doesn’t get boring. Second, everyone who’s looking at your desktop (maybe because you do a presentation, or you want to show something, or you requested some help) will be distracted by the wallpaper. You’ll likely end up talking about the things that can be seen on the wallpaper rather than the real subject.
A proper solution for this is having a generator that procedurally creates random images that are suitable as background images – that is, nice, soothing images that don’t distract too much. Basically the kind of background images that shipped as default in Ubuntu up to 7.10 and Mac OS X up to 10.4. My program is trying to do exactly that.
END_OF_DOCUMENT_TOKEN_TO_BE_REPLACED

I want to apologize for the lack of posts here. I know that many people want to know the outcome of the Apple thing and the status of the two jeopardized programs. So, to finally break the much too long period of silence, here’s the current status of the projects:

The presentation program is online again under its new name Impressive: http://impressive.sourceforge.net. Currently, there’s only a rebranded 0.10.2 version, but I hope to move forward with a new version in the first quarter of 2009.

The iPod management tool has been renamed to rePear: http://repear.sourceforge.net/. Along with the rename, the brand-new and much improved version 0.4 has been released.

I find it unfortunate and unnecessary that the issue needed to be settled involving layers and lots of money. It would have been easier for both sides (and certainly more civilized) to simply write an e-mail to state the problem. I am willing to co-operate. You can still call your lawyers if I don’t comply, but I don’t see any reason why there should be money involved from the start.

END_OF_DOCUMENT_TOKEN_TO_BE_REPLACED

After a long, long time I can finally (and proudly) present a nearly finished new version of CENSORED, the iPod management tool. The main highlights in this release are support for some new models (iPod classic and »fat« nano), AAC and (experimental) video support, import of Play Counts and upload to last.fm and a lot of other new features and bugfixes. Though the code is already finished, I can’t publicly release a full version yet because of two reasons: First, the documentation needs to be updated and second, I need an official Client ID from last.fm to legally upload (»scrobble«) play statistics, but the guy who is responsible for those seems to be very busy with other stuff at the moment.

So instead of releasing CENSORED 0.4.0 straight away, I’m doing a non-public beta test now. Users who helped me with the new version or otherwise expressed interest in it have already been invited. If you are also interested and have not received an invitation yet, just send me an e-mail.
END_OF_DOCUMENT_TOKEN_TO_BE_REPLACED

While testing my current work-in-progress demo on my brand-new Vista-powered and GeForce-8-equipped laptop, I noticed some really strange rendering glitches. Since this was the only machine where the bug occured, so I thought it would be some bug in my code that caused incompatibilities with that particular driver version for that particular chip revision or perhaps Vista. However, a friend had the very same problem on a GeForce 7 card, Windows XP and a much older driver than the one I use on my main development PC, which has a nVidia card, too. This meant that the problem needed some serious debugging :)
END_OF_DOCUMENT_TOKEN_TO_BE_REPLACED

However, there’s something wrong with virtually every shuffle implementation: It’s random.
I can already hear you saying »He gotta be kidding! Randomness is what shuffling is all about!« Well, you’re right. Mostly. The problem with conventional shuffle algorithms is that they are too random. They lack fairness and uniform distribution.
END_OF_DOCUMENT_TOKEN_TO_BE_REPLACED 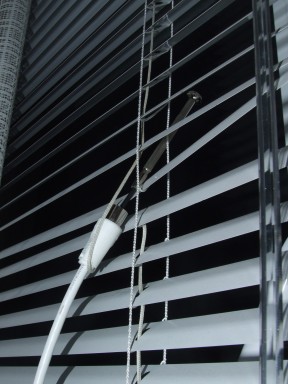 When I wanted to watch an episode of The A-Team in TV today, I was surprised by a black screen instead of Hannibal Smith and B.A. Baracus. What happened? At first, I thought the TV software couldn’t cope with the graphics driver I updated today to get a specific game working (we’re talking about Windows here, as you might have guessed :). I became skeptical when the same problem happened to another TV viewing program and even the Linux-based external DVB-T tuner box I have. Something has been wrong with my antenna feed.

Long story short, it turned out to be (most likely) a power outage in the attic where the antenna amplifier is located. For reason’s I’m not going to discuss here, there was no way to fix the problem in time, so I had to live without TV for a day – which would not have been a problem, if it hadn’t been for the boxing match between Henry Maske and Virgil Hill tonight. I really wanted to see this, but since there was no way to make the antenna system working again, I resigned. I phoned my father at home to have him record the fight, and while we were at it, he gave some tips on how to temporarily solve the problem. You know, stuff like »use some uninsulated wire«. Since I don’t have any uninsulated wire in my apartment, I tried the other suggestion: Use the antenna cable and put a screwdriver into it (this works because the center of the plug has a little hole in it). To my great surprise, this actually worked! After some experimentation, I found that the optimal position of this »poor man’s antenna« is close to the window. So I fiddled around a bit and hung the weird construction somehow into the window blinds. The whole thing works like a charm and now I can watch Maske’s (supposed) comeback fight in perfect quality even though the antenna feed is broken.

This post’s text is a screenshot

… from an experimental / example program. Click to read the full text: 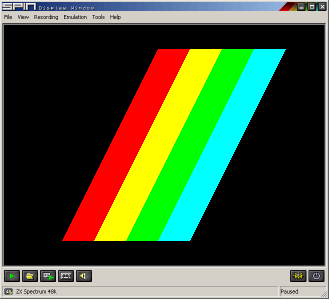 Yesterday and today, I finally did something I was planning to do for a long time: Writing some code for the Sinclair ZX Spectrum, the computer I »used« in my childhood. I was too young to write assembly code back then (but I did write a good share of BASIC), but since I’m becoming more and more interested in old-school computing due to my demoscene experiences, turning back to the beloved machine was the logical thing to do. The 256-byte effect I wrote is nothing special – it’s just four scrolling coloured stripes: The Spectrum logo. But although the effect is simple, I’m quite proud of it. After all, it’s the very first Z80 assembly code I ever wrote!

Honey, I shrunk the MP3 decoder

A few months ago, I implemented a minuscule MPEG Audio Layer II decoder. While I still consider this as a cool hack, it’s not of too much use nowadays. Everyone uses MP3 or Vorbis; MPEG Audio Layer II is only used together with MPEG Video (think VCD, SVCD and DVB), but you usually don’t have MP2 audio files on your disk. So the aim was clear: I wanted to have an as-small-as-possible MP3 decoder, too.
END_OF_DOCUMENT_TOKEN_TO_BE_REPLACED

»Now what’s that TD supposed to be«, you may ask. It’s the common abbreviation and executable name for Borland’s Turbo Debugger, an easy-to-use DOS-based debugger that was popular in the early 90’s. Your next question might be, »and why should anyone use that in 2007«? Well, to debug DOS programs, of course. »And who writes DOS programs in 2007«? I do – in this special case, it was a 256-byte intro.
END_OF_DOCUMENT_TOKEN_TO_BE_REPLACED