Yet another Vista Beta 2 review

Testing, reviewing and ranting about Windows Vista Beta 2 seems to be all the rage lately. Normally I don’t like trends like this, but I’m into eye candy and wanted to see if the Vista Desktop really proves to be usable on my normal desktop system. And I had that 32GB empty NTFS partition on my hard drive that really needed to be filled :)

The first adventure was to get hold of the Vista ISOs. The official download page was closed before I arrived at home last Thursday, so I tried an (incredibly slow) BitTorrent download first. Meanwhile, I found a deep link into one of the download servers at some forum, which enabled me to download the file. However, the download opened directly in Opera – and I knew that Opera did already flip some bits in Linux ISO downloads I did a few months ago. Quite unsurprisingly, after that night, I had an ISO file on my hard disk with exactly the correct size, but an incorrect MD5 sum. I hastily downloaded cURL to try another time. After coming back from work, I again had an ISO file on my disk – and again with a wrong MD5 sum! Man, was I furious. I was so in anger that I decided to burn the ISO, regardless of the errors it had, and hoped that it works. To my surprise, this worked out.

The installer can be described completely with one single word: it’s slow. And by that, I mean »slow in every aspect«, from minute-long pseudo-lockups right after booting to a sluggish user interface and an hour-long installation that first copies files to the hard disk (seemingly one byte at a time) and then decompresses them.

For some reasons that, according to common FUD, have something to do with DRM and stuff like that, Microsoft ditched the NT boot process and replaced it by something new. This means I got a graphical-textmode boot prompt that let me choose between »Microsoft Windows« (note the absence of any version indication) and «Earlier version of Windows«. The latter one simply resumes with XP’s own boot menu. As expected, the GRUB that was in my MBR got killed, but according to Internet sources, reinstalling GRUB is possible. 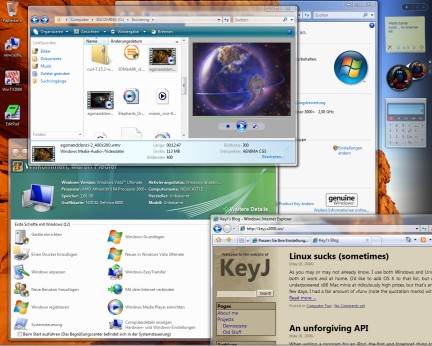 The new windowing system Aero Glass works as Apple’s Quartz Extreme or Novell’s Xgl: All window contents are rendered into a off-screen backbuffer, and the graphics chip does all the heavy lifting of actually displaying the windows. And while it’s at it, there’s some room for alpha-blending, smooth animations, window shadows, or even Pixel Shader effects like Vista’s blurred window decorations.

Aero Glass is the third implementation of this concept I used, and it does its job pretty well. The glass effect looks really nice and the window show/hide animations are fancy, but inobstrusive. Microsoft has found a really good balance between eye candy and usability at this point. However, it’s not perfect. Except from the shadow widths, there is no way to tell active and inactive windows apart, which can be misleading in some places.

I absolutely can’t complain about the rendering speed. Moving windows etc. is absolutely smoothly, and overall UI responsiveness doesn’t seem to have suffered from indirect rendering either. One of the drawbacks of the new on-card compositing approach is that some legacy APIs in Windows can subvert the whole scheme. As soon as some application tries to do something like excessive non-client painting, Windows will fall back from Aero Glass to the non-composite Aero Basic. This means that the screen will go dark for a brief moment, and show up again immediately, just without the transparency and glass effects. The bad thing about this is that the Aero Basic theme is one of the worst graphical styles I’ve ever seen, on par with KDE’s awful Keramik. And even worse, running MPlayer is enough to trigger this behaviour :(

The new Explorer is about as confusing as I feared. There are so many funny looking colored control bars that I just couldn’t keep track of them all. (Yes, it is worse than XP’s folder task pane.) Fortunately, Microsoft has thought of that and included options to revert Explorer to near-classic style. However, I can’t accept that they removed the single useful view mode: the list view! It’s just nowhere to be found! C’mon, they can’t possibly do that! On one side, there’s the absolutely great path component navigation in the address bar, but on the other side, they force the user to live with either the kiddie-style icon view or the much-too-verbose (and, thanks to context-sensitivity, really confusing) detailed column view. I really hope that Microsoft fixes this in the RC1 or RTM version.

Microsoft’s new security policy is that the user has to be asked for permission for every possibly harmful operation, even if multiple operations take place one after another. These dialogs pop up quite frequently, which wouldn’t be much of a problem, if the system would not hang for a split second just before :(
For batch operations, the confirmation dialogs appear way too often. If some Microsoft employee read this: I suggest adding a hotkey that asks for confirmation once and disables the UAC feature (as it’s called) until enabled again. Windows could display a warning symbol or use a SUSEish »red with bombs« wallpaper during the unsafe periods to remind the user that protection is off.

As a 3D graphics enthusiast, I was anxious to see how good OpenGL performance is under Vista, especially because there were rumours about dropping OpenGL support almost completely. There would be a OpenGL-1.4-to-Direct3D wrapper, sources said. The good news is that I didn’t notice such a thing. Windowed and fullscreen OpenGL applications were exposed to nVidia’s driver directly, having the full OpenGL 2.0.x feature set exposed. (I just hope that this is not a nVidia-specific feature!) The only thing I noticed is that windowed or badly-programmed fullscren applications run a lot slower, due to stuff like memory congestion (Aero Glass uses up every byte of the graphics memory for itself) or multithreading (slow switching between the OpenGL and Glass’s Direct3D context), I guess. Turning off compositing restores full XP-like 3D performance again.

4 Responses to »Yet another Vista Beta 2 review«