Over the last few weeks, I upgraded my old TV set to a shiny new LCD TV, along with a 5.1-channel AVR and a Blu-ray player. This was done for two different reasons: First, I wanted a HDTV set for quite some time already, but I waited until it was safe that I could afford it. Second, the old TV set, which was the already repaired former set from my uncle, started to behave erratically again, so it was obvious that I needed a replacement anyway. 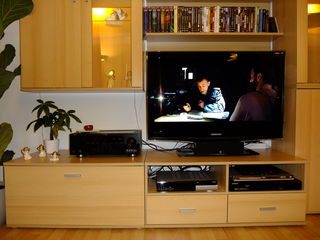 Until now, my setup consisted of a Universum FT7155 TV, an el cheapo Philips-branded ESS-based DVD player, my girlfriend’s PlayStation 2 and finally a Comag M 100/2 CI PVR. The PVR is the most important source here: With its twin satellite tuners, it’s possible to record two shows at once, while watching or playing back a third. When we bought that device a year ago, it pretty much changed the way we watch TV: Now we record every show we want to watch, even though we’re planning to watch it live. This way, we can easily start watching at a later point, pause at arbitrary points or rewind scenes we want to see again.

The TV set is a standard 4:3 50Hz CRT TV originally manufactured by ITT Nokia. It’s approximately 12 years old and was an upper mid-range model back then: Two SCART inputs (ubiquitous here in Europe), 16:9 switching, picture-in-picture and teletext with a whopping 800-page memory (pretty cool). Picture quality is still perfect after all these years, but unfortunately, the device started to malfunction: After being switched on, the image won’t come up until up to one minute later, and even then, it was distorted. After a few on-off cycles, it’d work OK, but this already suggests that the device might stop working soon.

The first addition was the A/V receiver and speakers set. I didn’t have any special wishes for these – I didn’t care about brand names, but I wanted a 5.1 subwoofer/satellite system because I just don’t have the space for full-size speakers. I’m fully aware that this sets a strict upper limit for the sound quality, but I’m not a perfectionist in this regard anyway.

So what I finally did is the following: I went into a nearby electronics shop, had a look at the AVR+speaker kits they sold there, and bought the cheapest one. The only problem: There were two of them, both from Yamaha, both for the same price. In the end, I bought the one where the center speaker is shaped like a bar so it fits on the stand of a typical LCD TV without obstructing the IR receiver. This might have been a mistake, though: The sound quality of the center speaker isn’t all that good, so I might buy a better one soon.

The AVR, a Yamaha RX-V365, is a pretty nice device. It’s nothing spectacular: 5.1 channels, 2 HDMI inputs and 1 output (Repeater only), 2 optical and 1 coaxial digital audio inputs (assignable). The operation struck me as complicated first, but I quickly found out that it was, in fact, pretty good: Every feature works exactly as you expect it. I particularly liked the YPAO auto-setup function: By placing a microphone at your default listening position and having the AVR generate a few test tones, it automatically detects all those difficult to setup parameters like speaker distances and levels. Pretty cool and useful. My only gripe is the lack of digital audio inputs: three is barely enough for my current setup (the old DVD player already has to go without a digital line) and if I’ll go ahread and buy a Xtreamer or similar device in the future, I’ll definitely run into trouble.

The least spectacular device of the three: It’s simply a Blu-ray player with Profile 2.0 and 24p support. It does its job well, the only issue is that there’s no separate resolution selection for DVDs and Blu-ray discs: If set to 576i, it will play back BDs in low resolution, but if set to 1080p, it will upscale DVDs with its inferior internal scaler and deinterlacer.

That’s the most interesting part: A 37-inch LCD HDTV with 120 Hz technology (called 100 Hz here, because, y’know, PAL vs. NTSC) with a built-in USB media player that supports all major formats, including Blu-ray-quality H.264 and the MP4 and Matroska (MKV) containers, which is the primary reason why I chose this model. As it turned out, the media player feature is a bit hard to use and lacks support for multiple audio tracks and MKV subtitles, but I still bought it: This TV set is one of the cheapest of its class and feature set anyway, so I might as well buy it, use the internal player until I’m fed up with it and buy an external player later.

The picture quality is OK. Of course you can’t expect a LCD or PDP TV to come anywhere close to an old CRT TV in terms of picture quality, but the B650 does its job quite well: The scaler is top-notch, the deinterlacer works very well and the frame rate conversion (FRC) is acceptable (though I don’t see much improvement there compared to a two-year-older model I tested a while ago).

I came across a pretty unexpected issue when connecting the PVR to the DTV: The PVR offers four different analog video outputs: CVBS, S-Video, RGB (via SCART) and YPbPr. S-Video isn’t supported by the TV set, but the other formats work – except that the quality is not as expected: Via RGB, I got noisy moiré-like patterns all over the image, as if there was a considerable amount of crosstalk in the cables, but regardless of the type of cable I used (I tried two different ones). I guess that’s already a problem of the PVR, because I saw these problems on the old set too, but not as strong as now. YPbPr fares a bit better: The image is free of noise, but I see sharpening artifacts (»halos«) at the right side of object edges. I can’t tell whether this is due to faulty image processing, a flawed output at the PVR again or simply a connection problem (which I can’t imagine, because I already use pretty high-quality cables). Strangely, the best type of connection between the PVR and the DTV turned out to be good old CVBS: The comb filter of the B650 does its job so well that I can hardly notice any dot crawl artifacts and the halos are much, much less strong. Quality still isn’t perfect, but it’s acceptable at least. The only real issue left is that the DTV doesn’t support 4:3/16:9 format switching via the respective SCART control signal, so I have to change formats manually if I want to watch a 4:3 show, which sucks. I know now that my next PVR/STB needs an HDMI output, but considering that this will very likely be an HD capable model, that’ll be no problem :)

Posted in Personal, Reviews | No Comments yet