The golden rules for XML usage

A few minutes ago, a friend came up with the idea of a XML-based checksumming tool. This is another great example of immense over-engineering in the XML world. I won’t go into detail about when to use XML and when not – I just want to establish some basic rules:

Argh, I lost my partition table!

Today, Gentoo Linux 2006.0 has been released. I don’t have tried Gentoo ever before, but the 2006.0 Live CD was said to feature a nice user-friendly installer. Because I was still in my »distro testing« mood (a leftover of the preparations for my presentation at CLT), I decided to give the CD a try.
END_OF_DOCUMENT_TOKEN_TO_BE_REPLACED

Sticking to the Anti-Direct3D camp

As I already mentioned some time ago, the 3D API of my choice is OpenGL. There are two main reasons not to use Direct3D, the only alternative to GL. The first reason is of course platform-(in)dependence, because I develop stuff for both Windows and non-Windows systems. OK, platform-independence isn’t really a crucial issue for demos as Win32 is the main platform for new-school demoscene stuff nowadays. (Nevertheless, a multi-platform demo still gets some additional appreciation, but that’s nothing you’re going to win a compo with.)

Reason number two: Direct3D is said to be much more complex. I don’t have seen much Direct3D code yet, so this part is mostly prejudice. Today, after a brief IRC conversation with a friend who codes D3D stuff for a living, I decided to give the DirectX Sample Browser (which is part of the SDK) a try. I really wanted to rethink my attitude towards Direct3D. Alas, it ended in disaster — instead of curing me from my aversion for D3D, looking at the tutorials reinforced my anti-D3D opinion …
END_OF_DOCUMENT_TOKEN_TO_BE_REPLACED

Today, I briefly tried some Python IDEs (not thoroughly, I just installed them and started them once). One that caught my attention (in a negative sense) is Eric3: 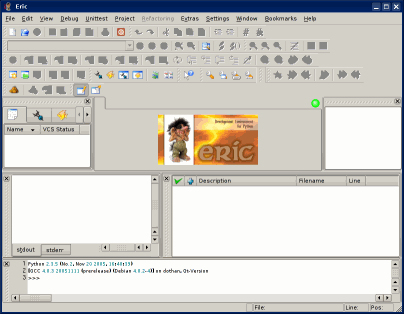 I remember having seen screenshots like this from KDevelop and MS Word, but these were »artificial« ones, generated by deliberately activating every toolbar and dock window available. This is the first program I’ve seen that provides this kind of experience »out of the box«, without any configuration, at the first start.